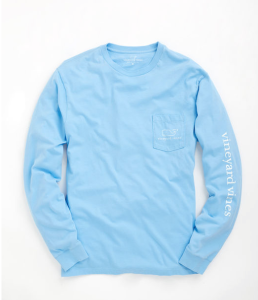 Vineyard Vines, a favorite store for preppies from Massachusetts to Palm Beach, will make its Maryland debut this spring with a new location at Westfield Montgomery Mall. The company takes its name from Martha’s Vineyard, where it began in 1998 as a tie manufacturer before moving on to clothes and accessories for men, women and kids. The pink whale logo is now a staple at college campuses nationwide, not to mention many of our local high schools — where shirts like the one shown here have become ubiquitous. The new store will move in where Brighton Collectibles just moved out, on the first floor of the Nordstrom wing next to Tesla.

Also coming to the Nordstrom wing of Westfield Montgomery Mall this spring: Johnston & Murphy, the classic men’s footwear company that has made a pair of custom shoes for every president since Millard Fillmore. Clearly the historic brand is also popular with people who don’t live at the White House: Johnston & Murphy has a half-dozen stores in the D.C. area, including one at Reagan Airport. In addition to shoes, the company also makes luggage, leather goods and clothing for men and women.

Two restaurants that were displaced by construction last year are about to reopen at the new Pike & Rose development in North Bethesda. Chipotle will return on Monday (Feb. 9), followed by La Madeleine on Feb. 19. Both had been tenants of the Mid-Pike Plaza shopping center, which was torn down last winter. Stella Barra Pizzeria is also set to open at Pike & Rose next Thursday (Feb. 12th).

Silver Moon Jewelry & Accessories, the new incarnation of Tiara Galleries & Gifts, opened this week at Congressional Plaza in Rockville. The scaled-down shop will carry some items from Brighton, which just closed its store at Westfield Montgomery Mall. Other popular lines include Vera Bradley, Pandora and Endless. Click here to read more about Tiara’s transformation in our Jan. 8 edition.