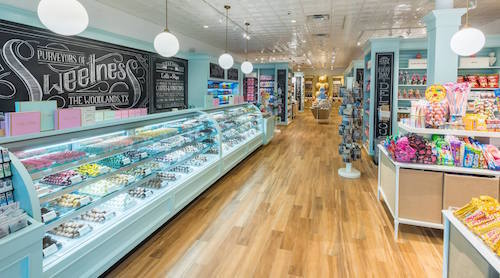 The Lolli and Pops candy store at Westfield Montgomery Mall is scheduled to open by Halloween. But trust us: You’re not going to want to share these sweets with random trick-or-treaters. Lolli and Pops is a San Francisco-based chain with an eclectic selection of gourmet, retro and international candies, all wrapped up in a ’50s decor that would look right at home on Disneyland’s Main Street U.S.A. If you’re looking for Choward’s Violet Mints from New York, Jonboy Caramels from Seattle, Butlers Irish Whiskey Fudge from Dublin, Leone candies from Italy or Mr. Stanley’s Toffee from England, this is the place to find them. The store also specializes in oddball drinks like Moxie Original Elixir, Brownie Caramel Root Beer and Jones Peanut Butter and Jelly Soda. And did we mention there’s a room devoted entirely to gummy bears — with plenty of free samples? This will be the third D.C.-area location for Lolli and Pops, which arrived in Annapolis and Tysons Corner last year. You’ll find it on the mall’s lower level near Macy’s, next door to the upcoming Alex and Ani store. 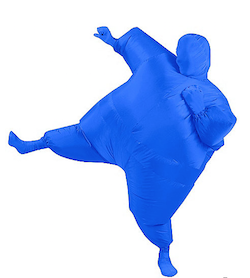 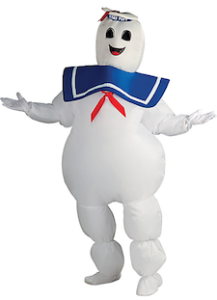 If you’re planning to take the kids out shopping for Halloween gear this weekend, don’t wait too long: Costumes from Star Wars, Minions and Inside Out are already flying off the shelves at local Halloween stores, as are the Avengers and other classic superheroes. Also hot this year is the new breed of inflatable costumes, which come with a battery-powered air pump to keep everything puffy through a long night of trick-or-treating. Popular inflatables include sumo wrestlers, Baymax the robot from Big Hero 6, and the Stay Puft Marshmallow Man from Ghostbusters. But pretty much anything inflatable is a hit at the pop-up store X-treme Halloween on Rockville Pike, says manager Dennis Bracey. “We’ve got a T. Rex, Spongebob and Patrick the Starfish, and we can’t even keep them in stock.” For the girls, characters from the Monster High franchise and Disney Channel’s Descendants are popular choices this year. But Princess Elsa from Frozen is still holding onto her crown: Just like last year, she remains the top pick for girls who want to be royal. 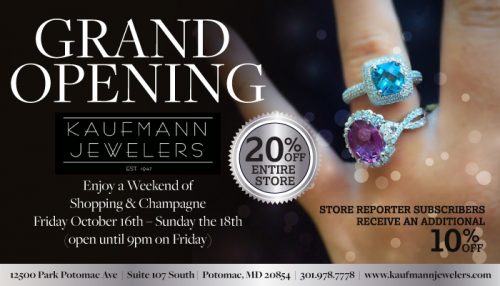 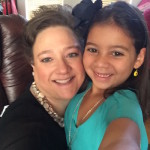 Here’s our Butter jacket winner from On Cloud 9

Congratulations to Store Reporter reader Jill Mendelson Rodriguez, whose 7-year-old daughter won a super-soft Butter jacket from On Cloud 9 at Potomac Woods Plaza. For all you contestants who didn’t win the jacket but still want to visit On Cloud 9, watch your email later this week for a special coupon from Store Reporter.  (And if you didn’t enter the contest but would like to receive the coupon, click here to send us an email and we’ll be happy to send one out.)

Amazon.com got some extra competition this month as Target upped the price-matching ante and online newcomer Jet.com dropped its plans to charge for membership. Target stores and Target.com are now promising to price-match comparable items from a long list of retailers including Amazon, Bed Bath & Beyond, Staples, Walmart, and even warehouse clubs Costco and Sam’s Club. Check your phone to compare prices while shopping in the store, or come back within 14 days if you find a lower price at any retailer on this list. As for Jet.com — an online retailer that launched this fall as a direct competitor to Amazon — the young company now says its customers are filling their shopping carts much more quickly than expected… so never mind about that $50 membership fee, it won’t be necessary after all. Jet doesn’t promise two-day delivery à la Amazon Prime, but it’s not charging $99 a year for membership either — and a quick search shows that Jet’s prices often beat Amazon’s by 10 percent or more. So if you’re ordering stuff that you don’t really need in the next 48 hours — even if you already belong to Amazon Prime — it may pay to take Jet for a spin.