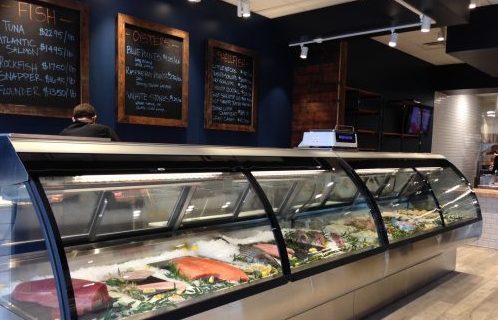 After six months of renovations to the former Little Gym space at Potomac Woods Plaza, O’Donnell’s Market opened its doors this week with a promising selection of fresh fish, seafood and baked goods. The store was just beginning to stock up when we stopped by on Wednesday, but owner Bill Edelblut says he’ll soon be adding a salad bar, grab-and-go items and a full-service bakery. O’Donnell’s isn’t cheap: Much of the seafood is priced around $25 a pound, and crab cakes are $10 apiece. But we were impressed with the super-fresh flounder, one of the more economical choices at $13.50 per pound. Edelblut has a long history in the seafood industry; his family owned the venerable O’Donnell’s Sea Grill restaurant chain, which closed its last remaining location at The Kentlands two years ago. 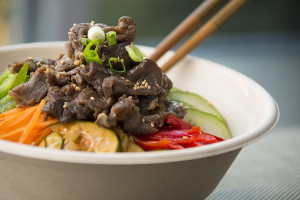 Korean BBQ at the mall

B/Bop/Q, a new Korean fusion restaurant, opened at Westfield Montgomery Mall last week in the corridor adjacent to the Dining Terrace. The concept is based on Korean bibimbap, but also similar to the Chipotle spinoff ShopHouse Southeast Asian Kitchen. Diners move along a serving line as they start with rice or noodles, add a protein, then customize their dishes with fresh vegetables and sauces. Also on the menu: tacos, wraps, dumplings and Korean-style chicken wings. B/Bop/Q is the brainchild of Ken Choi, a food industry veteran who operates cafes for NASA, the American Red Cross, the Library of Congress and other local institutions. He hopes this will be the start of a national Korean fusion chain, with four more locations already planned for the West Coast. B/Bop/Q is the second Asian restaurant to open at Westfield Montgomery Mall in the past month, following the November debut of neighboring Shanghai Bao Kitchen. Next up, after the holidays, is Tara Thai.