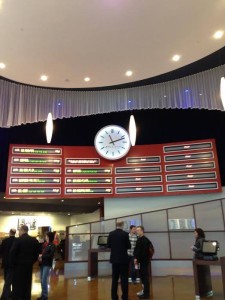 Today Store Reporter had a chance to tour the new ArcLight Cinema at Westfield Montgomery Mall, which
officially opens Nov. 7 — but we just got word that there will be some sneak-peek movies before then, including screenings of The Exorcist, Alien and The Shining leading up to Halloween. Check out our photos of the ArcLight lobby and movie memorabilia, including costumes from Robin Hood and Black Swan.