The outdoor ice skating rink at Rockville Town Square has closed for the season, but pizza and candy will keep the kids busy in downtown Rockville this spring. Mellow Mushroom, the pizzeria taking over the former Oro Pomodoro space on Maryland Avenue, has set its grand opening for May 2nd. (Click here for more on the Rockville Mellow Mushroom, which will cater to families and large groups.) Also new at the Town Square is the candy store It’Sugar, which opened on Gibbs Street last weekend with nostalgic sweets and giant boxes of Nerds, Kit Kats and Sour Patch Kids. This is the seventh D.C.-area location for the fast-growing candy chain, which also specializes in bachelor party fare (candy undergarments, anyone?) and will be open late most evenings. 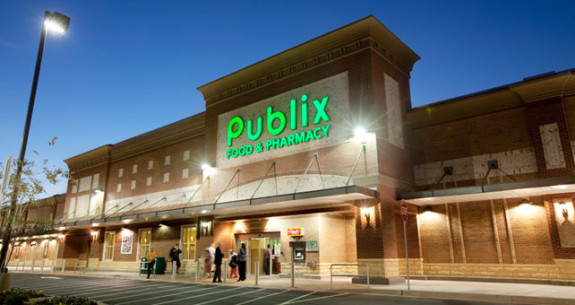 Publix on the way?

Former Floridians — and those who vacation there — were abuzz this week after the Washington Business Journal broke the news that Publix is eyeing the D.C. area. Publix, a much-loved supermarket chain in its home state of Florida, has expanded its territory in recent years to include Georgia, Alabama, Tennessee and the Carolinas. The company recently announced plans for its first two stores in the Richmond area and confirmed that Northern Virginia is on the horizon. Could Maryland be next? For now, Publix is noncommittal. “We are currently looking to aggressively expand in the state of Virginia,” a spokesman told Store Reporter this week. “There is still plenty of room for growth in our operating states.”

This was a bad news/good news kind of week for Starbucks, which got sued for allegedly shortchanging its latte customers even as it announced plans to donate all of its leftovers to charity. The class action lawsuit, filed by two customers in California, accuses the coffee chain of underfilling its lattes by 25 percent to save on the cost of milk. The news comes just weeks after the settlement of a similar lawsuit against Subway for coming up short on its footlong sandwiches. (See our March 3rd issue for more on that.) Meanwhile, Starbucks also announced the start of its long-planned initiative to donate all unsold meals to local food banks every night. The goal, Starbucks says, is to donate five million meals in the program’s first year

Amex out, Visa in at Costco

It’s been a year since Costco and American Express announced the end of their longtime partnership, but the two parties are taking longer than expected to finalize their divorce. The original spring end date has now been pushed back to June 20th, after which Costco will stop accepting Amex cards and start accepting Visa. If you already own a co-branded Costco/Amex card, watch your mailbox for a new card from Citibank Visa — this time with an even more generous cash-back rewards program.