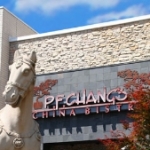 P.F. Chang’s, one of the last remaining tenants at the nearly-empty White Flint Mall, may not be sticking around much longer. We hear the upscale Chinese restaurant could end up joining its former neighbor, Cheesecake Factory, in making the move to Westfield Montgomery Mall. Insiders say Montgomery wants to add more restaurants to the section where Cheesecake Factory moved last year, which so far includes Bobby’s Burger Palace, Aroma Espresso Bar and the soon-to-open Blaze Pizza. A furniture store in that area recently closed, and other departures are expected as the mall carves out space for more dining options. Even Old Navy is rumored to be on the way out — either leaving the mall altogether, or relocating to smaller quarters in another wing.

Tale of a classic

One tenant who made the move from White Flint to Montgomery Mall says she couldn’t be happier with her new digs. “My sales are twice what they were at White Flint,” says American Classic Clothes owner Lenore Briskman, who’s been designing and sewing traditional children’s apparel for more than three decades. Briskman opened her original store in Potomac Village after people admired the clothes she made for her own children. “My customers range from Nancy Marriott and other multi-millionaires to the waiter at the Cheesecake Factory two doors down,” says Briskman, whose husband Robert was a founding executive with Sirius Satellite Radio. Still a bundle of energy at 78, Briskman says sewing and running the store are her favorite forms of relaxation. “The mall asked me when I plan to retire,” she says. “I told them, ‘When they throw dirt in my face.'” 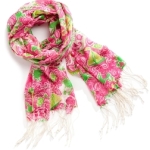 At Westfield Montgomery Mall, it appears the new Lilly Pulitzer store is already a hit with all those super-coordinated women who plan ahead for summer family portraits at the beach. “The little girls are coming in with their mothers to get swimsuits, then the mom will get the beach cover-up or a dress in the same pattern, the grandma will get the longer shorts, and then they’ll get ties for the men to match,” says assistant store manager Kelly Fay. “They want to put together a great family photograph to remember their vacation.” Fay says the store also has been “flying through” its inventory of any pattern with a crab motif, including Maryland-themed scarves (sold only in this region) and the pink-and-green Get Crackin’ design shown here.