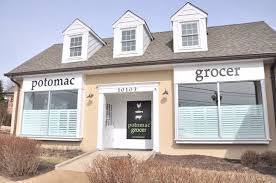 New grocer in the Village

Potomac Grocer, an upscale market specializing in local, natural and organic foods, is finally making its long-awaited debut in Potomac Village. “We’re kind of like a Whole Foods or Balducci’s, but much smaller,” says owner Tom Spencer, noting that he’s put a lot of time into hiring the right staff. That includes two chefs — one dedicated to pastries, and the other focused on preparing meals to go. Potomac Grocer is on River Road next to Walgreens, in the space that spent decades serving horseback riders as The Surrey.

Speaking of seafood: Boston-based Legal Sea Foods has closed its restaurant at Westfield Montgomery Mall. No comment from the company, which also shuttered locations in Florida and New York. As we told you last week, the mall plans to open several new restaurants and a movie theater later this year. But it’s still deciding what to do with Legal’s leftover space.

Steaking a claim on Rockville

There’s a new place to eat in Rockville Town Square: 82 Steak Out has opened on Gibbs Street next to Noodles & Company. The concept is based on the French tradition of steak-and-fry eateries, says co-owner Anna Don, “but with an American twist” of a slightly broader menu — including sides like creamed spinach, cauliflower and sautéed mushrooms. Not to mention Philly cheesesteak sandwiches, which you definitely won’t find in Paris.

Toys R Us and Pottery Barn Kids both exited Rockville Pike in recent weeks as their former homes — Mid-Pike Plaza and White Flint Mall — draw closer to dates with the wrecking ball. PB Kids bounced back right away, opening a new location at Mazza Gallerie in D.C. But Toys R Us, which has struggled for market share in recent years, says it has no plans to reopen in this area. The next-closest store is in Gaithersburg.