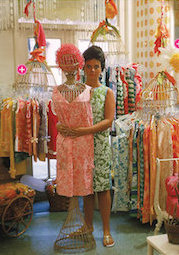 On the way to the mall

We’ve been hearing whispers that a very famous New York store might soon be joining the retail lineup at Westfield Montgomery Mall. We can’t tell you who it is just yet. But we can share details about three national retailers whose openings are just around the corner, starting with Lilly Pulitzer. The clothing line that’s synonymous with the Palm Beach lifestyle actually has a historic connection to the D.C. area: Designer Lilly Pulitzer first shot to fame in the 1960s, when Jackie Kennedy was seen vacationing in one of her brightly colored dresses. Pulitzer’s signature prints, featuring Florida imagery in hot pinks, greens and yellows, were originally created to hide the stains she acquired while selling juice at her husband’s citrus groves. Lilly Pulitzer (shown here) died last year at age 81. But the new store — set to open next month near the mall’s center court — will carry on her tropical preppy legacy.

This classic women’s clothing store has a First Lady connection worth boasting about: Michelle Obama is clearly a fan. Photos of the First Lady flaunting her famous arms in Talbots dresses have restored some cache to the 67-year-old chain, which has struggled in recent years to shed its dowdy image and catch the attention of younger women. Talbots, opening this spring on the lower level near Sears, is the third tenant to leave the dying White Flint Mall for a new home at Westfield Montgomery. But you won’t necessarily see  the chain’s signature red door this time around; that’s one classic look that many Talbots stores are phasing out.

After more than a decade at the forefront of the designer denim craze, True Religion Brand Jeans will open a store this summer on the mall’s lower level near Nordstrom. In addition to jeans for men, women and children, there will be a wide selection of shirts, loungewear and accessories for those who don’t mind True Religion’s premium price tags. (Even a pair of boys’ jeans will set you back more than $150.) True Religion is the second designer denim store opening in our area this year; see our March 13 issue to read about what’s coming to Rockville Town Square.