Talk about a fall harvest: Six new restaurants and a snazzy new movie theater will open at Westfield Montgomery Mall by December as the property’s $90 million transformation continues. The food court has been reinvented as an upscale Dining Terrace with luxurious seating and decor, while several new sit-down restaurants will present some welcome alternatives for Date Night. (It’s all good news for Mr. Store Reporter, who’s been known to complain when he has to accompany us to the mall on a Saturday evening.)

Blaze Pizza and Chipotle for the mall

First out of the gate for Westfield Montgomery Mall this fall is Blaze Pizza, which recently opened in the Old Navy wing across from Aroma Coffee. The thin-crust, personal-sized pies are topped with fresh ingredients as you make your way down an assembly line, then fired in the oven for a couple of minutes while you wait. The result is surprisingly good, and so is the price: $5 to $7.65. Some people refer to Blaze as “The Chipotle of Pizza.” You can compare the two for yourself later this year when Chipotle makes its debut at the mall’s Dining Terrace.

The Westfield Montgomery Mall location will be the first Maryland venture for MET Restaurant Group, which has three locations in Boston and one in Nantucket. Steaks cooked on a wood-burning grill will be one of MET’s specialties, along with Rigatoni Bolognese and Steak/Salmon Tartare Duo. The spacious bar will specialize in martinis on tap — perfect for grabbing a drink before the movie. MET opens in October across from the ArcLight Cinema. 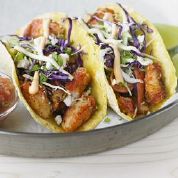 Lobster ME at the mall

How many ways can you eat Maine lobster? The list is surprisingly long at Lobster ME, from Lobster Tacos to Lobster Mac ‘n Cheese to Lobster Rolls with Cajun, Italian or Vietnamese spices. Not to mention the Lobsicle, a whole grilled lobster tail on a stick. Everything on the menu will be prepared from scratch in a setting designed to look like an old lobster shack, complete with old-growth timber reclaimed from the Penobscot River. The Westfield Montgomery Mall location will be the first Lobster ME restaurant outside Las Vegas. It’s scheduled to open in late November in the Dining Terrace next to Cava Grill.

The Minnesota-based CRAVE chain specializes in steaks, salads and sushi. “It’s a little bit of everything you crave,” says marketing director Zach Sussman. “We’ll have things you won’t find at a traditional sushi restaurant.” Store Reporter recently checked out CRAVE’s Miami location, where the sushi was good but the Margherita Flatbread was the true hit of the evening. CRAVE  is scheduled to open in December on the lower level of Westfield Montgomery Mall, near Bobby’s Burger Palace and The Cheesecake Factory.

Cava Grill moves to the mall

This is a quick-service version of the popular Cava chain, but that doesn’t mean the restaurant will skimp on details. “We’re going to have a wood-fired oven where we’ll be making organic pita, roasted meats and vegetables fresh every day” along with salads and dips, says Cava co-founder Ted Xenohristos. The beverage menu will include freshly pressed vegetable and fruit drinks, as well as wine and local craft beers. Cava Grill opens in November in the food court next to Lobster ME.